I am always on the lookout for creative ways to make money.  What I didn’t know is that there are places in this world that will actually pay you to live there.  While n 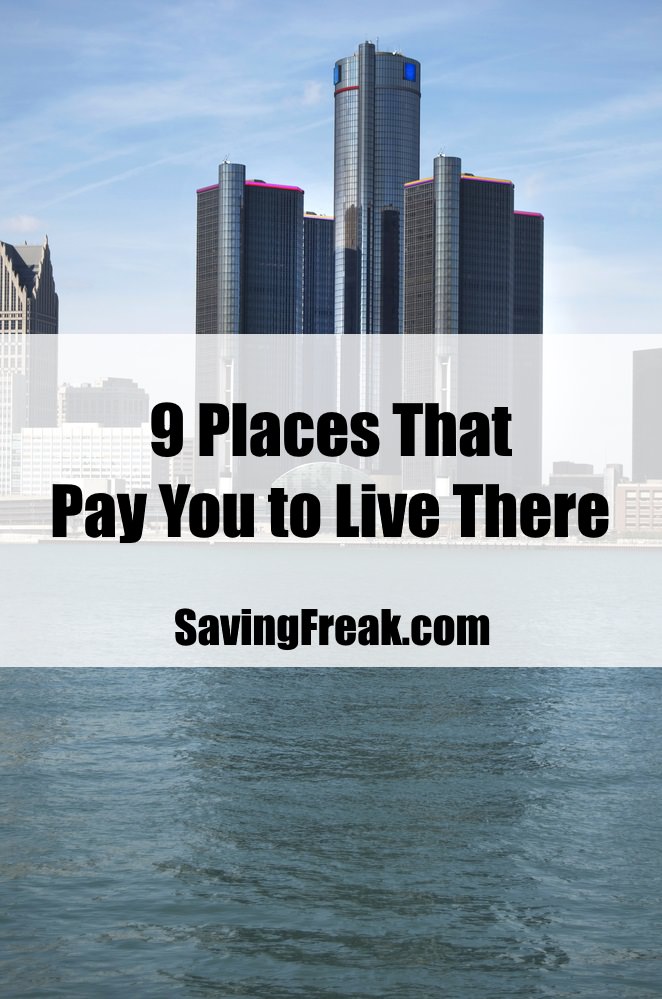 one of them are what you would think of as resort locations they are also not in the middle of a swamp with no commerce what so ever.  If you haven’t gotten settled or are looking for a new adventure then all of the places offer you some incentive to make them your new home.

As of 2013 there were only 1,007 people living in Harmony, MN. This was down from their 2010 census population of 1,020. This nice small town in southeastern Minnesota decided to try and lure younger people to the town by offering a home construction rebate program.

The way the rebate works is, you can get a cash rebate of up to $12,000 if you build a new home. The rebate is dependent on the size and cost of the home you build. You can get as much as 5% of your house paid for by the town. Not a bad little kick back to enjoy small town living.

So how much does it cost to purchase land in Harmony? There are several lots available in the $10,000 to $15,000 range with full city services.

You can learn all the details of their program from the Harmony Economic Development Authority.

The Entire Province of Saskatchewan, Canada

Saskatchewan has launched the Graduate Retention Program to attract and keep more college graduates to live in the province.

The payments are made as reimbursement of tuition fees that you paid during college. You have to file a Saskatchewan income tax return and must be a more recent graduate.

I have been to Saskatchewan in the summer and it was really nice. I am not so sure this southern boy could handle the winters though.

You can get the full details of the program at http://www.saskatchewan.ca/live/post-secondary-education/graduate-retention-program

Other Articles That May Interest You

Maine has a tax reimbursement program for businesses that create new jobs in specific towns of these two counties. There are already 280 employers participating in the program and the benefits last up to ten years if you are a job creator. Get the whole picture on their page for Pine Tree Development Zones.

The Entire State of Alaska

If you are willing to live in Alaska for at least 190 days a year, then you can take advantage of the wealth of oil royalties that the state enjoys. The states Permanent Fund Dividend Division pays residents who have been in the state at least one full year.

Get the full details of the program at http://pfd.alaska.gov/

Detroit has had major problems with their economy so it is not surprising that they have made a lot of incentives to bring new people into the city. First they are offering to give people beaten up homes, which require A LOT of repairs. The good news is they are also offering to give $150,000 to help with repairs. From the looks of them you will probably have to spend more than that to get them up to code.

With the Live Midtown and Live Downtown projects, college graduates can get $2,500 for the first year and $1,000 second year allowance to help with the cost of renting in those areas.

On top of that they are offering $20,000 in forgivable loans for anyone who purchases a home in the city. You have to be working for one of the companies that is participating in the program in conjunction with the city.

Niagara is a great destination… for tourists.  The town itself is pretty small with less than 50,000 residents.  To attract new college graduates they launched a program to reimburse people up to $3,492 per year in student reimbursement for up to two years.

You also get the title of “Urban Pioneer” for participating.  Which is pretty freakin’ awesome.

You may have noticed that all the cities so far have some pretty brutal winters.  If you are a tech geek then Chatanooga, TN wants you in a bad way.  The city has created GeekMove, and incentive program that offers financial assistance to computer developers who want to relocate and take advantage of the no income-tax policies of Tennessee.  Did I mention that Chattanooga is the first city in the country to have gigabit per second Internet connection?  I can here the computer gees running to the website now.

Like to golf? Curtis, Nebraska has a very nice nine hole golf course called Arrowhead Meadows. Currently there are six lots left and if you agree to build a home on one of them they will give you the lot for FREE (my favorite word). All the lots have their utilities ready and are on nicely paved streets.

You are not required to start rooting for the Cornhuskers so that is a bonus. Find out at http://www.curtis-ne.com/amlots.php

Kansas has “Rural Opportunity Zones”. These zones are 77 of the 105 counties in the state. All 77 of the counties offer state income-tax waivers for up to five years.

Also, 70 of those counties offer repayments of student loans up to $15,000. This applies to associates, bachelor’s and post graduate degrees.

You have to have lived outside of Kansas for five years and be moving into one of the ROZ counties after a specified date. Get the full details at https://choosetopeka.com/.

Just because you need to move doesn’t mean you cannot get some help.  There are plenty of affordable interstate moving companies to help with your move, and these places are more than happy to get new people inside their borders.

Overall if you have a job or are starting a business in most of these places you can get some really nice incentives to be a part of their community.  A community that REALLY wants you to move there.