Each month presents certain opportunities to save money and the January sales have their own flavor of best buys.

One of the principles that I try to stick to is buying things when they are on sale or clearance, at the best time of year, and before I need them.

With that in mind, here are the main things you need to know about hitting the best deals in the January sales.

What to Buy in January Sales 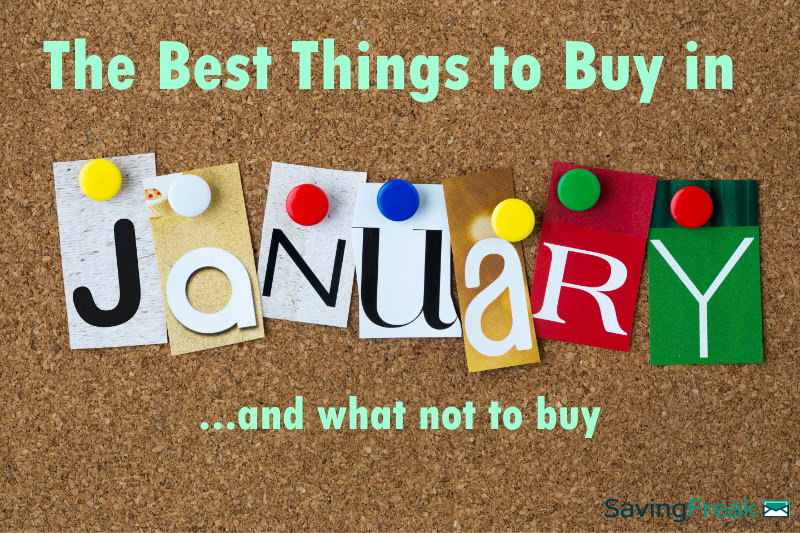 As a country, we spend a crazy amount of money on Christmas. Christmas decor for our homes and workplaces’ interior and exterior is a significant part of that spending.

After Christmas is over, there are always many items left in stores that need to be liquidated. So, get out into the major retailers and get yourself prepped for next year.

It may not feel like Spring is on the way, but in the retail clothing industry they bring in Spring clothes to allow people to get ready for the next season.

To clear shelf space, winter clothing is going on sale and clearance in January.  If you are buying for adults, now is a great time to get your new winter apparel, and for kids, it is time to get outfits for next winter.

Fitness equipment is a massive business in January as people try to follow up with losing weight, one of the most popular new year resolutions.  Since there isn’t a vast difference between different pieces of equipment, they go on sale in January to entice you into buying one future clothes hanger over another.

I went out to grab a few stocking stuffers on Christmas eve, and Walmart had already cleared a large section of the candy aisle and put out some of the Valentine’s Day candy.

The month of January presents many chances to get a leg up on Valentine’s day and make sure you do not overspend at the last minute. There will be frequent sales for jewelry and other gifts that are great for Valentine’s Day.

People give gift cards without knowing whether or not someone will use the card.  Those who know what they are doing can use gift card exchange websites like Cardpool to cash those gift cards in for cash or Amazon eGift cards.

Cardpool also lets you buy gift cards at a discount.  January presents the best time of year to purchase gift cards.  Since there will be a bulk of gift cards this time of year, there is the best chance of them going for an even better discount.

Many national parks offer free entry, but 124 national parks that do charge admission.  On Martin Luther King Jr. day, you can get into any of the parks.

You can save over $20 per person if you are driving into the park. January is one of the six times each year when this deal is available.

The term “White Sales” was created in 1878 when a merchant named John Wannamaker wanted to increase sales in the normally down winter months.  He did a discount on bed linens, which were all white at the time.

The idea stuck and we still get great discounts on bedding, towels, and linens.  How much?  You can get 50% off or more if you stack your savings with online rebate websites.

Things to Not Buy in January

Just as some items and services are an excellent deal in January, there are things you want to wait till they go on a better sale.  Unless you find a drop-dead awesome deal, you will want to avoid buying these items in January

The Consumer Electronics Show happens every year in January and introduces all of the coming new tech.  While everything on the shelves in January is already obsolete, the current tech usually doesn’t hit clearance until February.

Just like fitness equipment, gym memberships spike in January. Gyms make their money by having memberships and people not using them.

People sign up in droves for gym memberships in January, so you will find much better deals in June when people realize they never go to the gym and need to cancel.

Anything to do with the inauguration

The presidential inauguration happens on January 20.  They will be selling tons of merchandise and memorabilia.  After the election, the price of this merchandise gets put on clearance.

Give it till the beginning to middle of February to get a much better deal.

Seems like every major tech company has a voice assistant, but you missed the best deals on Black Friday.

You will find some good deals earlier in the year when the next generation of Google, Amazon, and Apple products hit the shelves.

Winter clothing, Valentine’s Day specials, and mattresses are just a few items where February sales will give you the best pries.

While you should always keep an eye on the online deal sites, these stores will give you some of the best sale prices in January.

Your old school bricks and mortar department stores are going to have you covered for winter apparel, bed and bath linens, and fitness equipment.   Some of the best stores for January sales are:

Lowes and Home Depot are going to be your big leaders for Christmas decor, overstock, and outdoor items.  They will be clearancing out a lot of these things in preparation for the Spring.

All of the clothing specific stores are going to be getting rid of their winter apparel. This covers anything from high end shopping to more moderate stores like American Eagle.

Just hit the clearance racks or the website clearance section of any clothing retailer and there are winter apparel deals to be had.

Most people think of January as a lost month for consumers. People are worn out from spending on Christmas and many have racked up some debt they need to pay off.

If you are able to plan your spending, then January sales present many opportunities. With less consumers spending the deals that are available tend to be some of the best of the year.