There are a number of websites that offer rewards and money for completing online surveys and offers. SaySo Rewards, which was formerly known as SaySoForGood does the same, but with a different approach.

SaySo Rewards donates money to provide meals to children in different parts of the world for every survey or offer that you complete.

How Does SaySo Rewards Work?

It is quite simple. You just need to fill out a form, in which you provide certain demographic information like age, gender, and contact information, including name and email ID, to start taking surveys. 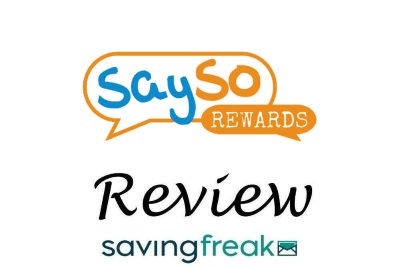 The demographic information is used by SaySo to identify the suitable survey for you and also to track the results of the survey.

You can either take surveys or complete an offer. You will get a reward from the third-party site where you completed the survey or offer, plus SaySo will donate a certain amount to its non-profit partner.

You can also use their WordPress plugin to earn points for an Amazon gift card and donate a meal. If you have a number of connections you can also refer people to take surveys or participate in offers via SaySo and receive points for those referrals.

Keep in mind that each survey has a specific target market. The company that’s conducting the survey wants a specific group or type of people to take it.

As a result, you might not qualify for a survey, because you are not part of the company’s target market. Over time, as you take more surveys, SaySo will collect more personal information from you (it’s up to you whether you want to provide the information or not), which will allow them to invite you for more relevant surveys.

Note that currently only citizens of the United States can take surveys. Previously, it was open to people in Canada, the United Kingdom, Australia, France and Germany as well.

SaySo Rewards works with Action For Hunger, which was founded in Paris, France in 1979 and works towards helping children suffering from malnourishment. It also works with communities that are struggling with hunger to find sustainable solutions as well as provide access to safe water. This non-profit organization has served over 50 countries around the world.

You will not actually get paid, but you will get the chance to win rewards and incentives or become eligible to enter a prize draw or sweepstake.

These could be offered by SaySo itself or its client that has created the survey — or offer — you participated in. In addition to this, SaySo will also donate an amount equivalent to one meal or about $0.15 to Action For Hunger.

The SaySo Rewards brand was initially meant to be targeted at their internal users, but it became a hit in the affiliate marketing space and morphed into its current avatar.

The donations made to Action For Hunger are sent on a quarterly basis. According to Action For Hunger, $45 takes care of a child’s meals for a couple of months. SaySo allocates a small amount for every completed survey, which based on their calculation, is equivalent to one basic meal.

SaySo also distributes third-party surveys to its members. So, if you’re a member of one of the several online survey distributors, you will come across SaySo Rewards surveys. On completing the survey, you get the reward and SaySo makes a donation to Action For Hunger.

Survey Junkie – One of the largest survey providers, SurveyJunkie is a legit online survey company.

MySurvey – One of the first online survey sites, MySurvey is a major player in the paid survey site group.

Harris Poll Online – Harris is a long time polling and consumer research company. Their new Harris Online platform is keeping them near the top of the industry.

SaySo is definitely the most socially conscious of the top online survey sites.

While they do not have the absolute best payouts, they are a legit online survey site and do some great work at raising money for a worthy cause.

As the site is around longer I fully expect them to get some of their issues worked out and continue to be a force for good and for good survey opportunities.